I got my first kiss when I was three months from turning 17 (yes, I was a late starter -- something I hope for my daughter too, ha!). It wasn't a great kiss -- it wasn't even a good kiss. The guy slobbered like a basset hound, and I thought I was going to throw up. Fast forward a month, and I ended up 'dating' a different boy (both were in a young musicians' group). This boy was younger than I was (the other was my age), and we were friends first. He played the violin (quite well).

He was sweet, intelligent, kind, etc -- and very cute ;) We got together during a band/orchestra trip to South Dakota, and although I don't remember a whole lot about that trip, I do remember sitting by him on the bus and getting butterflies in my stomach when he'd hold my hand and caress my palm with his thumb. 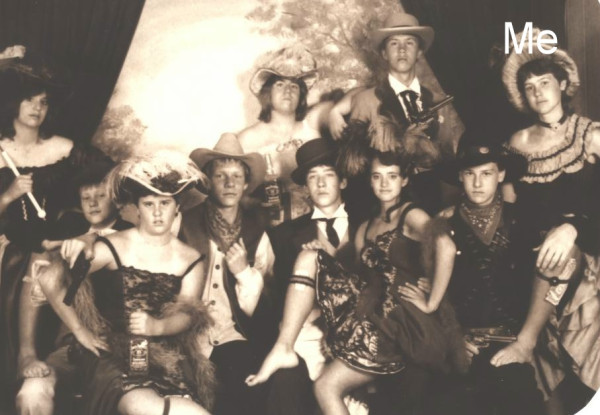 (He's the one I have my foot resting on.)

We 'dated' for 8 months or so (which translates to two dates outside rehearsal -- he lived almost a half hour away, and since I was the only driver between us, it didn't work out so well). During that time, he kissed me once...very chastely (closed-mouth and fast).

Then, he asked me to my senior prom, and I accepted (this was a couple months before prom) -- only to have a boy from my own school ask me a couple weeks later...so I dumped the sweet boy (sigh, I was a typical teen during this time, and I've often wished I handled all this better) and went with the boy from my school (he was a nice enough kid too -- but not nearly as sweetly innocent).

All this to say, I consider the sweet boy my first actual boyfriend -- and yesterday, on FB, I got in touch with him again for the first time since I finished high school (I was a senior while we were 'dating'). Periodically, I try names of those I've long since lost touch with, and when I tried his name (a few months ago), a person came up. He looked very little like the sweet boy I remember -- except for his blue, blue eyes. Seriously, he had the bluest eyes I've ever seen, and he still does. :) So I PM-ed him, asking if he was the same person -- and yes, he was.

It's funny how delighted I was when he PM-ed me back. That little contact with my first boyfriend...it's whimsical, really.

How about you? Have you ever gotten reacquainted with someone who marked a milestone in your life?
Collapse