...D had a great game on Friday night (thank you for any positive thoughts). He played well and even had a fantastic basket! :)

...my poor brother injured his shoulder somehow (he's not sure when it happened), and now he's dealing with a ton of pain and uncertainty about how it will be fixed. :( He cancelled our piano lessons on Saturday (he practically has to be dead to do that), and he didn't look so good when we saw him yesterday...he's hoping against hope he won't have to succumb to surgery.

...DH set up the tree on Saturday. He *never* sets up the tree (he admitted that he thought I liked doing it every year -- um, no). But this year, he was commenting on wanting the larger tree (we have two fake trees, both bought for ridiculously low prices many years ago -- different years, but both during huge sales). I'm not tall enough to do the larger tree (without a ton of hassle on my part -- hassle which always includes some kind of injury), so I've been using the smaller tree for the past few years. So I told him that if he wanted to do it himself, I wouldn't stop him ;) He did, and the kiddos helped (they get more helpful each year, of course), and now we have a very lovely tree (especially considering it's fake). 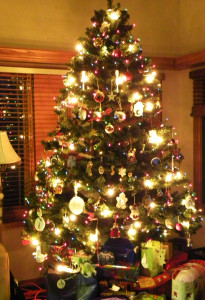 ...we went to my mom's for the monthly brunch yesterday. My mom made cookies with the kiddos (both my kids and both my brother's kids) -- brave woman! My brother's kiddos are 6.5 and almost 3, so they took a little more work (especially when my brother is so injured). But it seemed to go pretty well, and my mom even planned to keep J (the 6.5 year old) for the rest of the afternoon, to give my brother some rest. J is a sweet kid, but she's much more scattered than my kiddos ever were. She's also pretty giggly/silly, and she kept singing stupid songs -- I could tell it was annoying my mom, so I finally suggested to J that she find something else to sing. Hopefully, the afternoon went okay...

...I'm so glad NaNo is over. It's totally worth it, since I now have a completed book to work on, but the stress during November is a little over the top. I need to be more organized and actually complete a book during the summer or something so I don't have to resort to that. Now, I feel like I have tons of time every day :)