It's hard to believe it's the end of 2012 -- which means it's time for another list of books from yours truly. ;) I would've only done the top ten, except that I only have eleven five-star reads this year -- so I will highlight them all. It's always challenging to put this in any kind of order, and I want to point out that it's rather subjective (on top of already being a subjective list), as the way I feel about these books right now is different than I might have felt three months ago. Plus, the top eight are clumped so closely together in my mind (in terms of enjoyment) that they're almost random in their order -- you could simply say that I loved all eleven, and I adored the top eight pretty much equally!

That said, let's move to number Three -- the second of the two non-YA books in the top eleven -- (out of 111 books read this year): 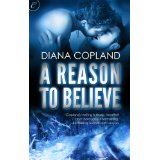 A Reason to Believe, by Diana Copland
Why did this stay with me? First, I liked the mystery aspect. I have no problems with paranormal elements, and this reminded me of a couple of YAs I've read with similar ideas (like Mara Purnhagen's series). Second, I really liked the main characters, Matt and Kiernan. Both were sympathetic and engaging, and I felt connected to each of them. Third, the romance is lovely here (again, it's a gay romance, so it might not be everyone's cup of tea). Even though they fall for each other quickly, that's the earmark of many romance novels -- and I felt it was more believable than many because of their circumstances. Fourth, the setting was well done. The icy cold and snow seemed to permeate much of the book, and it added a great element to it all. So yes, another highly recommended book (if you're interested, your best bet is the $1.99 Kindle version from Amazon). :)
Collapse