For those of you who happened to Google your title and ended up here, please know that one star is not a bad thing in Robin's world -- just the fact that I picked up your book and started it means that somewhere it's getting good buzz (or that your blurb was really cool). 'R' means it's a re-read. Brackets mean it's an ARC (linked to Tattered Cover's book page) or e-galley.

If you'd like to see my recent four-plus- and five-star YA recommendations, visit Robin ReadsnWrites.

Renegade, by J.A. Souders ****+ This was pretty intriguing. What I found unique was the world-building -- it was limited to the scope of the story. There were hints of what happened before and of the outside world, but it was definitely narrower than I'm used to. Interestingly, it was enough for me. I am curious about what brought them to that point and about what could happen next, but the story (and its time period) was captivating enough that I didn't mind not knowing more. Some other pros: Evie was a strong and unique heroine. I liked how Souders made it apparent very quickly that Evie was being brainwashed (or something similar), so I knew right away that things were crawling beneath the surface. And Gavin was a great counterpart to her. He was also strong, but he was clearly at the disadvantage, and I liked how he was forced into the position of helper -- and he did help Evie. Mother was nicely evil, and yet, there are hints to the reasons behind her madness (which is always appreciated), and in the end, I did feel sorry for her. The story: Evie lives in the perfect world. She's being groomed as the Daughter to the People in a land beneath the sea where everything and everyone flows with happiness...and yet, something isn't right. When Evie begins to realize that her memories are being altered, and when hints of her past continue to surface, she fights her conditioning. Then, a Surface Dweller discovers their home, and Evie finds herself helping him as if it's natural and instinctive -- when it should be everything but. However, as Evie continues to struggle mentally, and as pieces of her memory return, Mother begins tightening the net around her -- and around Gavin, the boy Evie is trying to save. Do they have any hope of escape when Mother has eyes and ears (and weapons) everywhere? (YA science fiction/suspense, released 11/12, Publisher: Tor Teen)

Crash, by Lisa McMann ***** Yay, my first five-star read (and it's March, ack)! I'm definitely a fan of McMann's books (I've loved all but one), so when I heard she had a new one coming out, I put myself on the list. It came in this weekend, I picked it up yesterday afternoon, started reading around 6:30, and finished by 8:30. I couldn't put it down, and that's always so much fun. :) I liked how the suspense and pressure built, how Jules' desperation heightened, how she fought it and then accepted it. There's a nice underlying mystery (how did Jules end up having visions all of a sudden?) too (which I'm pretty sure I know part of -- there are hints, and with the huge clue at the end, I'm thinking this is a nice set up...though I'm curious to see how it plays out in the next book). I think my favorite part is how Jules tells Sawyer, even though she knows he won't believe her -- even though she suspects it will only make things so much worse for her. I also like the 'real-life' drama going on in the background. Jules is dealing with a lot of crap with her dad too. The story: Jules has a normal life -- well, except for the visions. She sees the same scene playing out over and over -- on billboards, on the TV, on her computer; and even worse, there are dead bodies at the end. She fears she's losing her mind (even scarier when she takes into account her family history of mental problems). But then, when the visions begin taking over, Jules decides to fight back. Maybe she can do something about this -- and her determination increases when she sees that one of the dead bodies belongs to Sawyer, the boy she's loved for years (unrequited). Even though Sawyer is her family's enemy (their families both own Italian restaurants), Jules decides she must tell him, warn him...but when she does, things seem to get even worse. The visions intensify, Sawyer's family has a fit, Jules' dad is furious, and Sawyer looks like he's pitying Jules...and Jules has to find the solution on her own -- but at what cost? (YA thriller, released 1/13, publisher: Simon Pulse)

Currently Reading: Um, the same two I was reading before. Yeah, I will finish them, but I keep getting distracted. ;)

On Deck: A bunch more which look very good -- I like having this problem, I will admit.

tracyworld -- and anyone else who enjoys birds. :) These were huddled in three trees down by the bus stop, this morning. I didn't have my camera when I walked the kiddos down, so I returned after yoga on the off chance they'd still be there -- and they were. :) They flew off less than three minutes after I finished my little photo shoot... 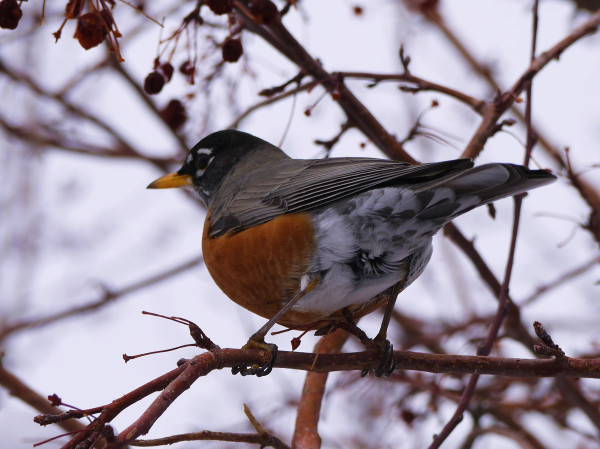 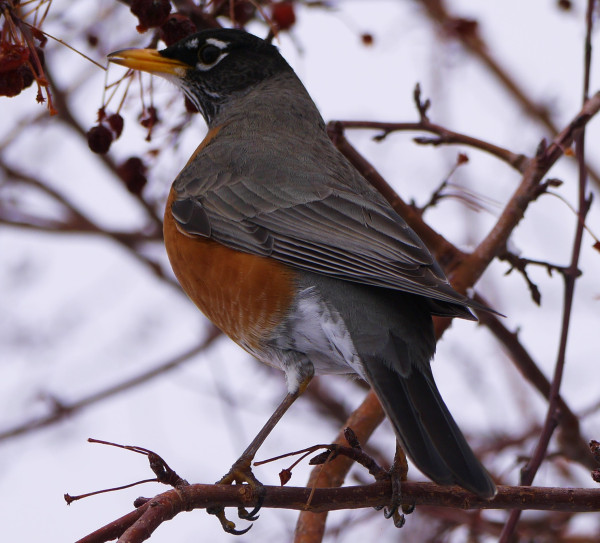