...Saturday was all about football and Outdoor Lab. D discovered he needed jeans for OEL, and since he never wears jeans, he didn't realize that one of the few pairs he has didn't fit. So we went to the thrift store to find another pair. And then it was time for football -- in 95-96 degree heat! D's team won, but it was sooooo hot. Every time the clock stopped, they had the coaches out there, slinging water. Even watching from the sidelines was unbelievably hot. Let's hope the weather will truly take a cooler turn (they're saying it will). 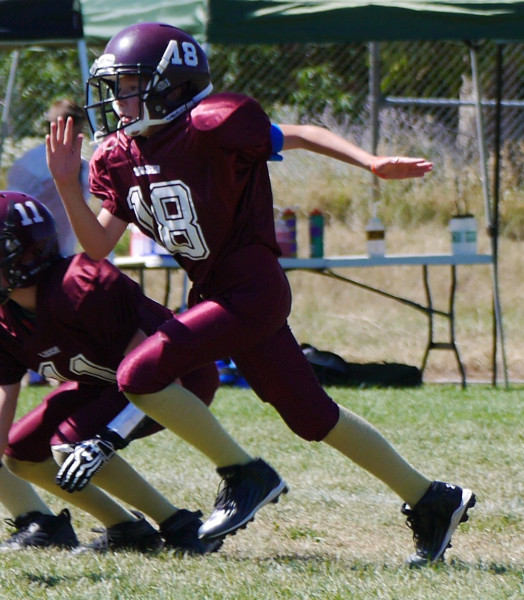 ...yesterday, E got to start soccer. She's on a very non-competitive team, and she's one of the best players, which is fun for her. I'm not sure the team will do very well, but I'm hopeful that E will enjoy it, regardless (she's not very competitive, either, so it might be a good fit).

...I saw D off to Outdoor Lab this morning. He was so excited (he barely slept last night). Two of his three bffs are in his cabin (they did some rearranging), and I think he's going to have an amazing week! It was interesting watching all the parents this morning. There were some actual tears from a few moms (none from the dads, big shock) -- I wasn't one of them. To me, this is exciting, and I'm not sad at all. I did really feel for one of the moms, though. Her son is in D's cabin, so I think he's going to be fine -- but D has mentioned in the past that this boy has no friends. None. He's not in D's actual class, so he only sees the boy during lunch and recess. D says he'll talk to him, and the boy seems fine -- but he just wanders around the playground during recess. (Sadly, he's not at all athletic, so even though I think D has invited him to join their football games, the boy isn't interested.) His mom looked completely miserable this morning, and I wished I knew how to comfort her. The thing is, some kids really struggle with social stuff. For whatever reason, they just don't fit in. We had a boy like that in our high school (well, we had a few). He was nice looking (I always thought he was cute, actually) and seemed smart enough (though he wasn't in honors classes -- but lots of people weren't), but he was always alone. The few times I saw anyone try to have a conversation with him, it didn't seem to work...like he couldn't figure out how to make small talk or to even have a conversation. :( This boy is a little bit like that. He seems very friendly, but he doesn't know how to talk to his peers. I've heard him before, and although D has the patience to wade through the excess chatter, I'm guessing most kids don't. He kind of babbles, and it's not about 'normal' things, either. My hope for kids like that is that they truly find their niche as they grow into themselves. I'm also sending all kind of good thoughts and prayers along with him this week -- I hope he enjoys himself!