...for D's game, it was sunny and quite warm (probably the warmest game we've had since early September). The kiddos played a team with a 'dirty' rep -- but the refs were great, and D's team won 21-0 (D got one of the extra points). 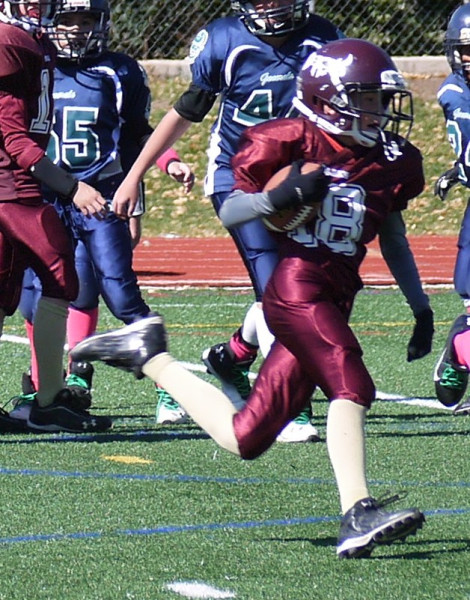 ...E went to the neighborhood Fall Fest with her auntie. I think she had fun, even though I guess her friends didn't make it. We showed up just in time to get food (and only the meat -- but since we were all starving, that was fine). We spent the rest of the day recuperating (ha).

...my MIL and her boyfriend came in Saturday night (unexpectedly). We went to breakfast and dinner with them yesterday. In between, E's team played another game. E was a defensive player this week, and although she did quite well (she can really clear the ball), having her and the other two strongest players in the backfield meant it was a scoreless game. So her record now is 2-1-2. I seriously doubt they'll lose anymore games (they have two left). The other team is not improving, and E's team gets better and more organized each week. There is one player on the team who is the most annoying kid ever, but other than that, the boys are fun for E to hang out with, I think (she's now the only girl).

...I'm making player posters for D's football team (and small certificates with pix for E's soccer team). I like doing stuff like that, so I've been playing. ;) It's nice procrastination, I must say.

...after E's game yesterday (which was overcast and quite chilly), it started to sleet. We work up to snow on the grassy areas, but I think it's already melted.