1. I'm going on a walk with a friend this morning, which should be nice. The only downside is that I got very little sleep last night, and I'm tired and cranky as a result. *sigh* I'll try to let the beauty of a CO fall seep in... 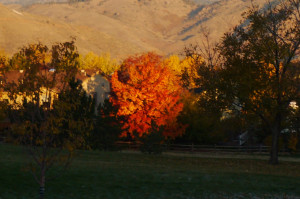 (This isn't great quality -- my camera's battery is almost dead, so it's almost like using a much weaker camera...but I love this tree in the early morning sunshine!)

2. I spent some time in the 6th grade classrooms again yesterday. It was enjoyable, but that final class of the three still seemed to last twice as long as the other two...I can only imagine how it must feel to the students!

3. I had two migraines this week. Neither was horrible, but it's tiring. The pattern seems to be that they come in on the left side and leave on the right. Equal opportunity, I suppose ;)

4. We're going to a Halloween party Saturday night (adults only) -- I'm not really a fan of such things, but it's being hosted by friends of ours who used to do this annually. They've gotten out of the habit for the past few years (maybe even five years), so the group of people are pretty excited, I think. Hopefully I'll get some sleep tonight so I won't be a zombie (ha).

Happy Friday -- how's fall going in your neck of the woods?
Collapse