I like Dunn's writing style, and I found this intriguing. It was sad too (which I often shy away from), but the ending was satisfying and made sense. Overall, it was a good read. 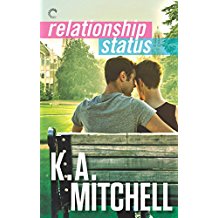 ****+
[Relationship Status, by K.A. Mitchell -- highly recommended for those who like NA male/male romance, those who've read the others in this series, and those who like dual-POV -- Carina Press, 4/17]

I've liked all the books in this trilogy, and this was a satisfying (albeit rather short) ending. I like Wyatt and Ethan, so having their POV trade off is a definitely plus. Their relationship is realistic, and the supporting characters are also fun to spend time with.

I read the 1st one years ago but forgot to pick up the second one. However, I got all of them for D this year, and he loved them -- so I gave them a go. They're definitely enjoyable, though I haven't finished the third yet. The pacing and tension in the first 2 is well done, and I really like the world building and how it's all twined in with the plot. David is a great hero. :)

This was okay. I didn't love how the MC really lacked in perception, and her justification for doing some of the things she did seemed fairly shallow. That said, I have known teens very like her, and she had a good heart, overall. I writing style put me off a bit too, as the MC seemed very distant from everything that happened. My favorite part was the complicated family -- definitely realistic.